Joined Mar 9, 2007
·
7,523 Posts
Word around the campfire is that I’m getting a greenhouse.
Just pulling numbers out of my ass, I‘m thinking no less than 20’x 40’, on the ground (sandy yard that won’t grow grass, except weeds).
I‘m throwing up here because you guys know things.
It’s 4x4 related because it is.
So help me out by telling me what you did right, what you did wrong, what is too big, what is too small, and what you wish if you could do it over. Tell what I don’t know.
Please post pics of anything you are proud of.

Err, space as far from trees as possible and keep the trees trimmed well....

Joined Sep 22, 2008
·
10,039 Posts
I have been wanting for s few years now but I don't have the room. Well I do but the back yard is too wet and when the creek gets running I get water back there. Nothing serious but too wet of a greenhouse.
Front side yard would be ok but I put a small garden in this year. Trial run kinda. Tomatoes, cukes, peppers, peas and beans. I went and added a drip irrigation system in with drip lines to the plants and set up a timer to water regularly. Before I set up the timer I forgot to shut it off one night. Leaving for work the next morning I figured I'd check on the plants and saw the drip lines still dripping 12 hours later. Each plant recieved about 50 gallons of water that night.
Was thinking about putting up a smaller greenhouse to start seedlings early. Front yard would be ideal but I'm thinking the township might have something to say about.

I started with a big garden. It's about 1/3rd the size now (down to 55x35). I used to have cold frames, no greenhouse. The cold frames work well, I recommend starting with those before investing in a greenhouse. The "temporary" greenhouses suck (some call them hoop houses) because literally everything you do with them is temporary.

The cold frames I had were made from sliding glass door panels from Habitat for Humanity. I made temperature-controlled vents, now you can buy them cheap. They worked great, but while I have a green thumb my wife is more... fairweather thumb. I got tired of doing all the work and mowing around them so they went away.

I probably have 300' of soaker hoses I don't use anymore. I tried driplines, that sucked to set up. So then I used home-made T-holders to hold up soaker hoses so they would weep water and then it would follow the hoses to the plants. That worked. Still a lot of setup. I found that using a few strategically placed hoses makes watering precisely and quickly fast and easy. Then it's easy to till the weeds away. I use a fairly small tiller and then a Stihl Kombi tiller when the plants get big.

I tried using landscape fabric, riprap, cardboard, old plastic tarps, pick something for weed control. That's why you see all those pavers piled up by the fence. I don't do that anymore either.

This picture is WNW facing. On the left side you can still kind of see where the cold frames used to be (dark spots in the grass to the left of the garden). Out of the frame in the lower left is my old garden fence corner. In the bottom right is my raspberry mess, which is where the old corner of the garden used to be. The post the satellite dish is on, and the post where another satellite dish used to be (can still see the cable) framed an area where I used to keep pumpkins.

So, the garden used to be 55x85, with a 35x20 "wing" on it with a separate fence charger for the pumpkins. I used to have 3 2-joule fence chargers to keep the animals at bay, I'm down to running one.

This year I didn't plant much because I spent most of the spring working on two bathroom renovations from hell. Only intend to can tomatoes and maybe peppers this year. Prefer the peppers blanched/frozen.

Maybe when I'm older I'll expand the garden again, but I'll have to build a real root cellar to make it worth it. There are only so many canned foods you can stomach. And I can only get potatoes and onions to last until early January in the house basement. It's a PITA to bury them in the yard and dig them up when you need them.

If I were to do a greenhouse it'd be one of the ones you half bury into the hillside and use earthtubes for heating.

Joined Nov 9, 2005
·
1,246 Posts
So my wife's grandpa had that giant greenhouse. Technically he specifically bought the house and property because of the greenhouses. I got to see the tail end of them before he had the last one torn down maybe ten years ago? I was the only one in the family that was interested in his gardening crap so he'd talk my ear off about it. He spent a fortune every year to run the heat because he said pretty much everything stopped growing at about 38 degrees. His greenhouses attached to a large concrete block building and used that as a "man trap" so he didn't lose heat out of the greenhouses in the winter. Most greenhouses lack a man trap.

If I were to do a greenhouse, it'd probably be something about 8x20 outside dimensions in very similar to the design below. Except I'd use concrete block and modern building materials. It'd give you about a 30" walking area and 48" growing area. Which means you'd be using tools to reach the back.

Basic design for a more energy efficient greenhouse (so you don't have to heat it during the extended growing season):

Triple the length of your growing season with this simple, energy-efficient greenhouse design.
www.motherearthnews.com


Earth tubes (so you can heat the greenhouse even in our climate in the winter without burning natural gas or propane) and get crap to grow as long as there is sunlight: 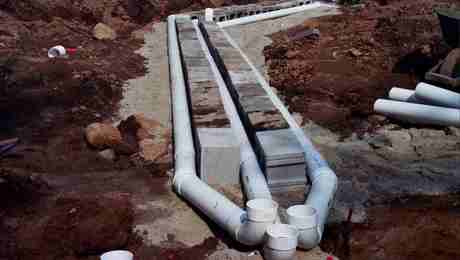 I saw my first “earth tube” back in 2004, on a tour of row houses in Darmstadt, Germany — a tour which had been organized by the Passivhaus Institut (PHI) to show international visitors some examples of Passivhaus construction. As a visiting Canadian engineer specializing in residential energy...

Joined Jan 20, 2006
·
4,097 Posts
I through together this quick and dirty reusing wood windows I saved from the house this thing works great I move it around with the tractor forks and she can start her seeds in the spring. When she is done with it for the year it goes out back for storage.